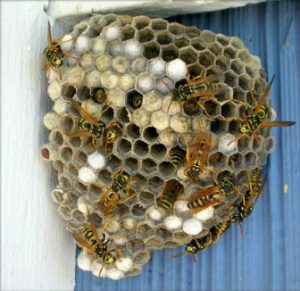 Are you one of those people living in Southern California, asking, “where can I find the best wasp exterminator near me?” Here’s the answer to your major wasp infestation problem: The Bee Man. Located in Orange County, CA, The Bee Man provides wasp nest removal services across residential and commercial areas in Southern California. With years of experience and training under their belts, our professional wasp exterminators can eliminate your wasp problems.

Wasp Nest Removal: What You Should Know

Wasps are not aggressive unless they feel threatened; however, they do not lose their stinger, and their stings can be quite painful.

Wasps like to build their nests on the south or southeast side of a structure. They continue to build year after year in the same locations. Once wasps have established their territory, it could take 2-3 years to break the cycle. The wasp nests need to be treated and removed.

The food source for wasps is the smaller bugs and insects, living on the plants and bushes in our yards and landscaped areas. Whiteflies, aphids, ants are all favorites of the wasp. In the ecological system, wasps are a benefit because they eat the insects that destroy our plants, bushes, and landscapes. The problem is that they are a stinging insect and may not co-habit well with humans. Controlling the insect population may help control the wasp population.

Still Asking, “where to find the best wasp exterminator near me?”

The answer to this question is just around Southern California. Call The Bee Man, and you can trust our wasp exterminators to treat and remove every wasp nest in your property. Remember, wasp infestations can be problematic, but with the right solution, all your wasp infestation problems will be eliminated! The Bee Man is happy to be part of the solution to eliminate wasp infestations.

Let our licensed wasp exterminators near your area handle all your wasp nest removal problems!